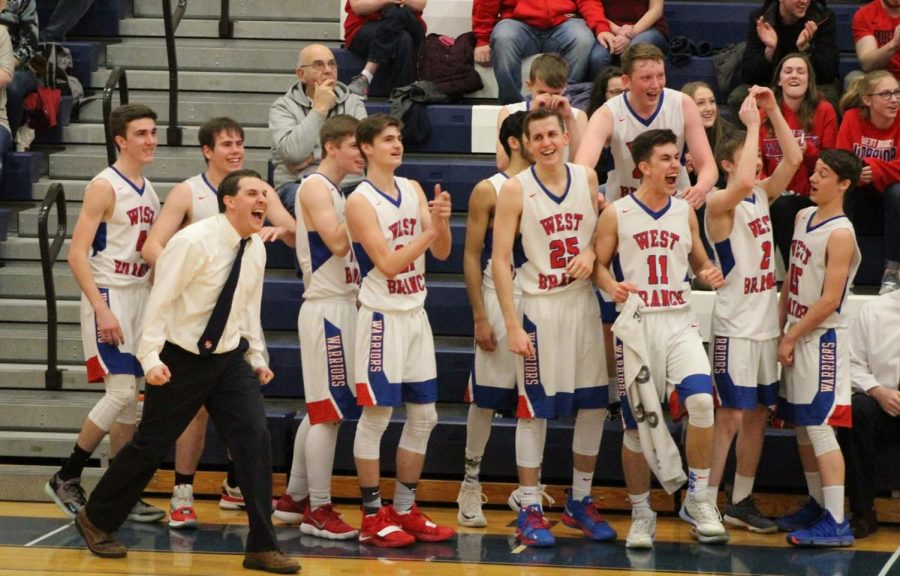 The bench goes berserk as Josh Guerra hits a jump shot late in the 4th quarter.

Allport- As noted earlier in the week, the Warriors were looking to get revenge on a familiar foe in United, and that is exactly what they did. The Warriors went on to defeat United 74-42 and will now play Bishop McCourt Monday in the District 6 semi-finals. The Warriors were better in every category, especially rebounding. The Warriors dominated the boards all night long, corralling a total of 68 rebounds on the night. Larry Cowder had 17 rebounds, and Dalton Kristofits had 10.

Cowder had a big night for the Warriors, as he added 21 points to his 17 rebounds. David Guerra scored 16 points, and Kristofits also recorded a double-double with 10 points to go along with his 10 boards- and he did all of this while coming off of the bench.

“My success came from working hard in the offseason,” Cowder said. “Just kept at it all summer and never got away from it for more than a week. I created opportunities for myself by just having the mindset of always trying to get better and be the best I can be. Tonight I just tried to crash the boards whenever I could, and really tried to get in good position for a good shot.”

Ayden Gutierrez opened the scoring for the Warriors, as he scored on the first possession of the game. Gutierrez would end up with 10 points on the night. Both teams went back and forth for the rest of the first quarter, as the Warriors ended the quarter up 14-12. From then on, it was very evident that the Warriors had the edge. The Warriors won the second quarter by seven points, taking a 30-21 lead into the half. Bench play was key in the second quarter, as Trenton Bellomy, Chance Eboch, and Kristofits all scored and produced valuable minutes.

“Coming off the bench, I just want to do the most I can to help the team win,” Bellomy said. “I was a little nervous, but after I got in, it was one of the coolest feelings ever.”

The Warriors came out of the gates on fire to open the second half, as they went on a 9-1 run to open the half. From then on, it was all West Branch. Matt Fluck played well all night long, as he scored 9 points and kept many possessions alive by getting offensive rebounds. The Cowder, Guerra, Kristofits trio became too much for United to handle, as those three really dominated the third period. About midway through the 3rd, Guerra drove into the lane and finished through a lot of contact, drawing the whistle and getting an and-one that got the crowd on its feet. The home court advantage was a big factor, as the crowd gave the Warriors an extra spark all night long. West Branch went into the 4th leading 52-36.

United didn’t quit, as they began to crawl back little by little. But every time the Lions seemed to gain a sliver of hope, the Warriors would snatch it from them and go on a big run. Gutierrez scored four straight points off of turnovers in the fourth, and from then on the Warriors never looked back. West Branch outscored United 22-6 in the final quarter. West Branch took out their starters late in the fourth, and that is when the biggest play of the game occurred. With time expiring, Josh Guerra nailed a jumper from the corner, and the entire gym went bonkers.

“It was amazing,” Josh Guerra said. “I felt overwhelmed at first but that turned into a joyful feeling. It was as if everyone came together as one, like we all were banded together. I was so thankful and excited to see all of the support.”

*The above pictures were taken by Georgette Eirich and Noah Fry*