Glendale Running Game too Much for Warriors to Handle 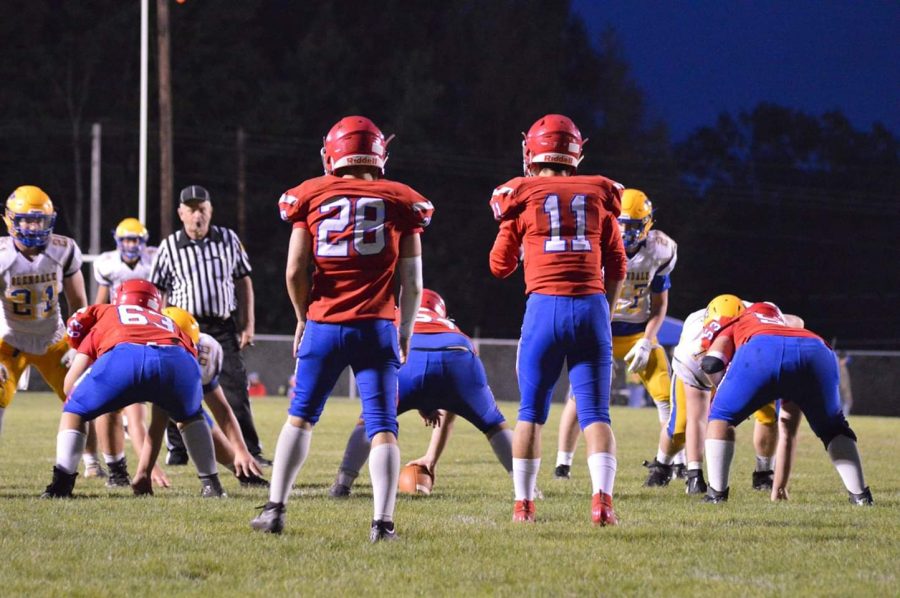 Ayden Gutierrez and Will Herring stand in the backfield as Gutierrez begins his cadence.

Allport- The Glendale Vikings knew that they wanted to establish the run game on Friday night, and that is exactly what they did. The Vikings could not be stopped, as they ran all over the Warrior defense. The Vikings accounted for 257 rushing yards on the night.

The Warriors opened the game on offense, and after a few first downs they were forced to punt. The Vikings went right at West Branch, marching all the way down the field for the game’s first touchdown. During the drive, Glendale received two penalties that called back two different scores. However, the Warrior defense couldn’t do anything to stop their rushing attack. West Branch responded with a well put-together drive. After gaining a yard on 3rd&2 on the Viking 28-yard line, the Warriors faced a pivotal 4th&1. West Branch attempted a Quarterback sneak, but the Vikings stopped Quarterback Ayden Gutierrez short of the line.

Both teams would proceed to go on a short drive that resulted in a punt. West Branch was pinned deep in their own territory and faced fourth down. The snap sailed over punter Eddie Dale’s head, and as he retrieved the ball and attempted to get the punt off, Glendale blocked the punt and recovered the ball in the endzone, resulting in a Viking touchdown.

The Warriors received the kickoff and again failed to out a drive together. Once again, the Warriors faced a fourth and long deep in their own territory. The snap sailed Dale and went out of the endzone for a safety, putting the Viking lead at 16-0. The Vikings would once again find paydirt midway through the second quarter to go up 23-0.

The Warriors responded late in the first half as Gutierrez hit Trent Bellomy over the middle for Bellomy’s first varsity touchdown. However, a personal foul call that went against the Warriors after the play put them out of field goal range, and the two-point conversion failed. Another score before the half by Glendale put the Vikings up 30-6 as both teams headed for the locker rooms.

Glendale came out of the half and picked up right where they left off. The Vikings went on another clock-chewing scoring drive. Again, the run game was too much for the Warrior defense to handle. However, West Branch didn’t quit. The Warriors were able to find some creases in the running game. Early in the fourth, Will Herring found the endzone for the first time this season. Sarah Betts tacked on the extra-point, and Glendale led 37-13.

Glendale began to pass the ball, and with the Warrior defense committed to the run game, Glendale found even more success. They scored once more to go up 44-13. West Branch went back to the run game on the ensuing drive, and Herring once again scored to put the final at 44-20.

“It’s frustrating,” said Will Herring. “We’ve been able to put points on the board, but we have to be able to stop people on defense.”