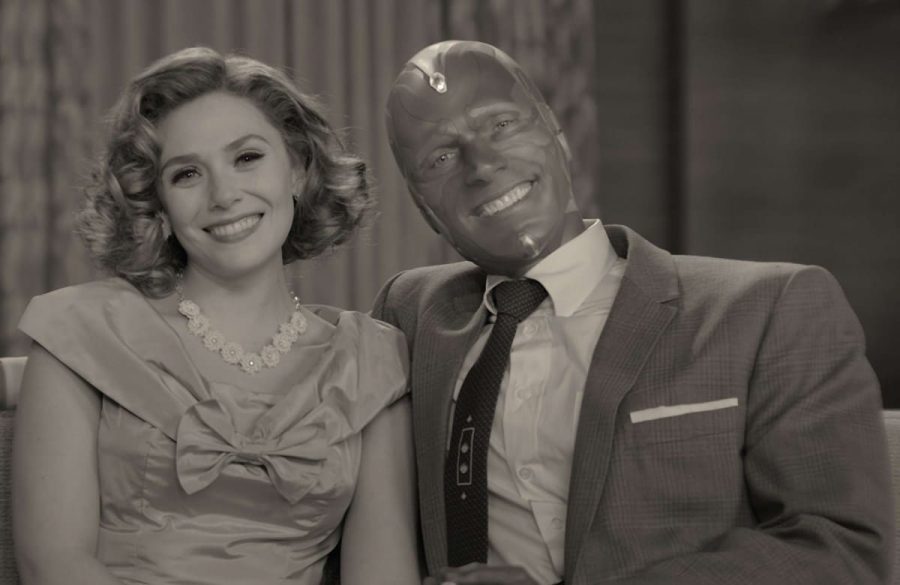 Wanda Maximoff and The Vision living a happy life in a 1950s small town.

Between the release date of Spider-Man: Far From Home and the first episode of WandaVision, fans of the Marvel Cinematic Universe have gotten 563 days without any Marvel content. Even though fans have known about the limited series since April 11, 2019, it finally went to screens on Friday, January 15, 2021.

WandaVision follows the story of what happened with Wanda Maximoff after the events of Avengers: Endgame. The show starts as a parody of a 1950s sitcom (specifically, I Love Lucy and the Dick van Dyke Show). As the series progresses, Wanda and Vision move throughout the different decades at what seems to be a faster pace than average life. Throughout the first three episodes, many distractions pop up, such as radio interference, a beekeeper, and a colorful toy helicopter. Vision starts to become suspicious of the sitcom world around him. In episode four, a lot of viewers’ questions get answered.

Many characters from previous MCU films, such as the movies Ant-Man (and its sequel), Captain Marvel, and Thor, make an appearance as well. These characters play a key role in figuring out what is happening in Westview, the town where the sitcom reality is taking place.

Currently, eight out of the nine episodes are released on Disney+. The final episode will release on Friday, March 5, 2021.

This isn’t the only Marvel-related Disney+ series. After WandaVision, there will be many more shows such as The Falcon and the Winter Soldier, Loki, What If…?, Ms. Marvel, Hawkeye, She-Hulk, Moon Knight, Secret Invasion, Ironheart, Armor Wars, The Guardians of the Galaxy: Holiday Special, and I Am Groot. If you are a fan of the Marvel Cinematic Universe, I would recommend getting a Disney+ subscription to understand the events in the future movies.

Critics love WandaVision, as it is certified fresh with a 92 percent on Rotten Tomatoes. It is rated TV-14 and is streaming on Disney+ now.