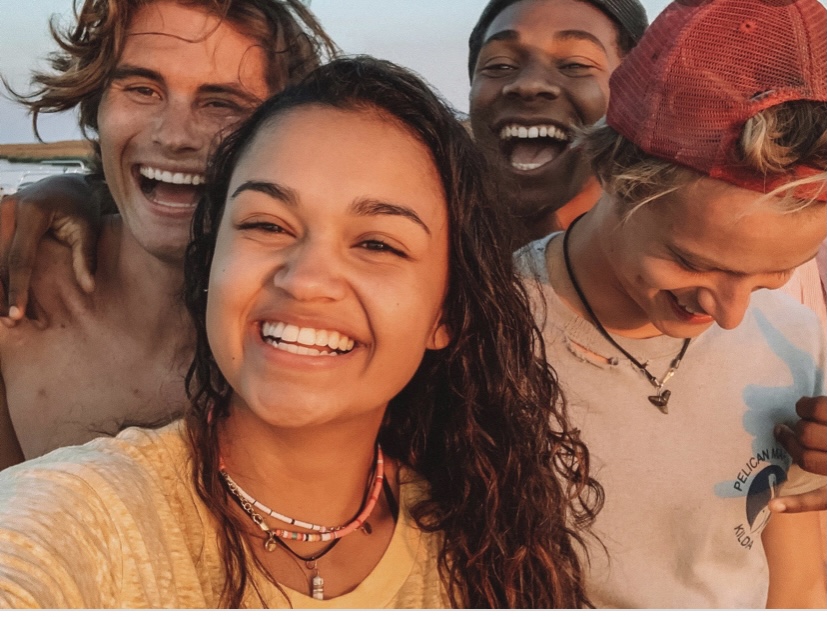 The Outer Banks cast smiles for a photo.

The Outer Banks, directed by twin brothers Jonas Pate, Josh Pate, and Tim Lacofano, premiered last spring. This series has a mystical genre as the main character John B struggles with the mystery of his missing father and mysterious treasure. John B and the Pogues, JJ, Pope, and Kiera investigate John B’s father’s disappearance. Their journey for the truth reveals the Outer Banks dirtiest secrets, hidden motives, and how the community works. A powerful antagonist with money and influence forces John B and the gang to make harsh decisions, even if it means breaking the law.

The acting is tremendous, and there couldn’t have been better choices for the characters. Fan favorites Pope, played by Jonathan Daviss, and JJ, played by Rudy Pankow, portray a touching and rather surprising brotherly bond. The two characters often clash heads with their unique personalities, JJ being the tough pro surfer and Pope being the group’s innocent brainiac. The two get into trouble after pursuing sweet revenge against the Kooks by sinking Rafe Cameron’s precious boat. Pope gets arrested for the act, and JJ takes the fall for him. JJ sheds a tear with a smile on his face in the next scene for his pal Pope. Other moments of friendship and loyalty are portrayed throughout the rest of the season as well and can portray emotions to the viewers.

The music and sound of the series is well-fitting with the overall mood of each episode. There is eerie and suspenseful music in thrilling and mysterious episodes, like in episode nine with the opening scene. In more upbeat episodes there is good vibing music, like in episode three with the boat ride scene. The music and sound effects add an aspect to the show the strengthens its plot.

Personally, I like the series. It elicits a great representation of friendship through loyalty and sacrifice. The series is an emotional joyride fit with teenage love and occasional immaturity; however, the plot might seem childish and unrealistic to an adult viewer. This Netflix TV series takes the viewer on an inspirational journey through some teenage conflict. The series is thrilling and mysterious if you’re a younger viewer. – Joey Trimpey

The Outer Banks is probably one of my favorite shows. It has one season out and the second season is on its way due to the very high demand by the fans. Every episode leaves you either on the edge of your seat or makes you think. I like this film because of the beach vibes and all the exciting events that happen throughout it.

John B, the main character, and his friends spend all summer trying to find the treasure that leads to his father’s disappearance. Eventually, he has the whole Outer Banks island on a search for him because he gets blamed for something that he didn’t do.

The picture quality is extremely realistic and the color scheme of the show sends the viewer into a summer feeling. Also, the show features many problems or situations that a normal teen would experience. This allows the watcher to be able to have feelings when watching the film. John B is not the only one searching for this treasure which leads to a lot of conflict within the film. The only thing about this film that I didn’t like was how the season ended. – Mariah Hayles

After being very popular last year, the Outer Banks cast and crew, as well as Netflix released the news that season two is coming soon.