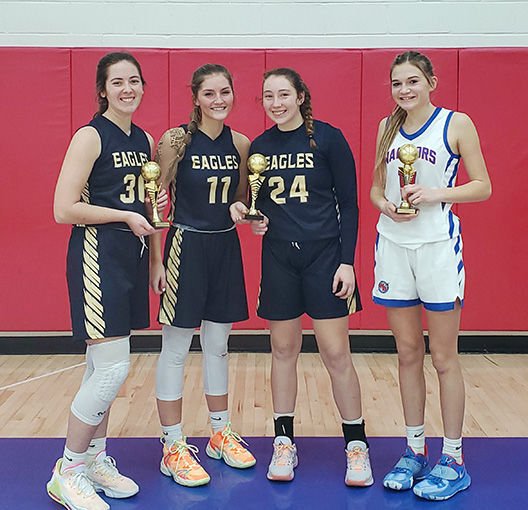 In the picture are all of the award winners from the tournament. From left to right are BEA’s Katie Hoover (Defensive MVP), BEA’s Maddie Perry and Abby Hoover (Co-Offensive MVPs) and WB’s Jenna Mertz (Tournament MVP).

Morrisdale- On December 29th, the Lady Warriors faced Bald Eagle’s basketball team in the final of the West Branch Holiday Basketball Tournament. The Lady Warriors rallied together to defeat Philipsburg Osceola 41-18 the day prior to make it to the final of the tournament. The Lady Eagles defeated Harmony 45-21 to also make it to the final. The Lady Warriors held the lead for almost the entire game until the last few minutes of the game where the Lady Eagles rallied consecutive points in a matter of minutes which led them to win 43-38.

Emily Parks led the Warriors in rebounds with 16. 16. Jenna Mertz was not far behind her with 10 rebounds. Mertz led the Warriors in points scoring 19. Behind Mertz was Katrina Chowder with 8 points, Ally Shingledecker had 5 points and Erin Godin had 4 points in the game. Mertz, Shingledecker, and Godin all had a three-pointer for the Lady Warriors.

Mertz was also named the Overall Tournament MVP (Most Valuable Player) in the Holiday Tournament.

The Lady Warriors fell to Williamsburg on January 4th and will play Glendale at home on Friday January 7th.