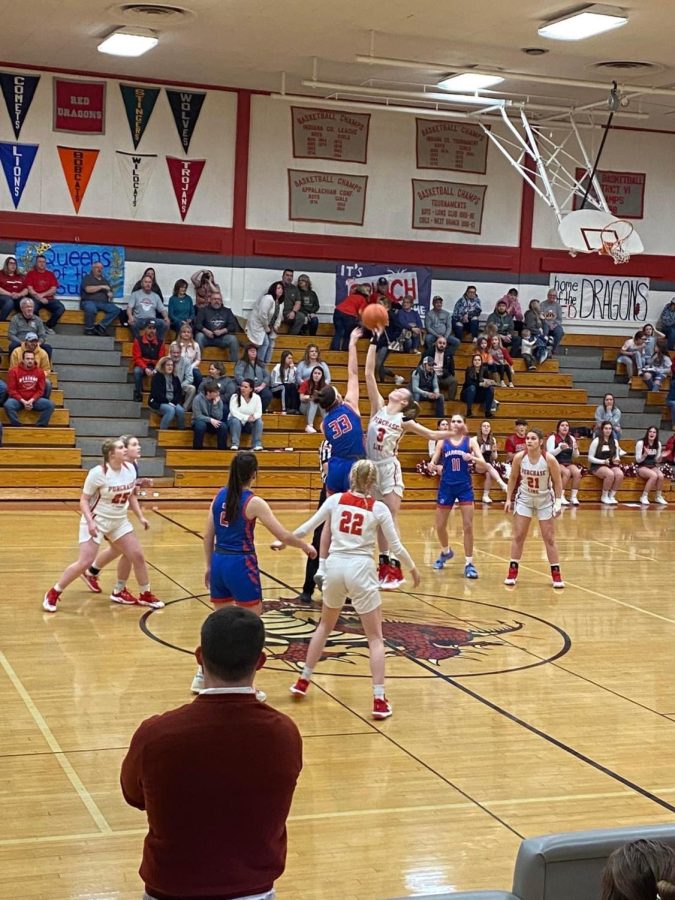 Katrina Cowder tips the ball to start off the game at the Warrior's first District match.

The Lady Warriors pulled through to take a 48-26 win over Northern Cambria. Northern Cambria played aggressively against the Warriors, having some foul trouble, with one player fouling out of the game. The warriors were able to stay controlled with their fouls and had a good defensive game. Jenna Mertz led the team offensively scoring 24 points for the Warriors. Ally Shingledecker made four of the five threes, ending the night with 12 points. Katrina Cowder was also an offensive threat having 10 points. The Warriors started playing off slow in the first half of the game, only having a six point lead at half time. After half time, the Warriors were able to regain some composure and have a strong third quarter.

Coach Justin Koleno said, “Our last regular season game, we started off a bit slow. We took a six point lead into halftime 19-13. We stretched the lead out quickly and kept it there winning 48-26.Ally Shingledecker added to her great season from behind the arc with 4 3’s on her way to 12 points of her own.”

After the Northern Cambria game, the Warriors traveled to Purchase Line to play in the first round of districts. West Branch came into the game being ninth seed and Purchase Line being eight seed. The Lady Warriors struggled against Purchase Line’s aggressive full court press, falling fast to the Lady Dragons. The Warriors had lots of fight left in them, being able to force 9 Lady Dragon turnovers in the second quarter and get more momentum. Jenna Mertz was the leading scorer with 25 points. Ally Shingledecker was able to net three 3-pointers, 9 of her 11 points being threes.

Coach Koleno says, “We took a little too long to settle into the big game. This was the first time any of the girls have seen playoffs. Jenna ended with 25 to lead all scorers on both teams. She ended up with 20+points in each of the last 5 games of the season. We had no seniors this year, so the girls have the opportunity to run this back next year and prepare for a deeper playoffs run.”

The Lady Warriors ended their season with an overall record of 12-10. This is the first year that all of the Lady Warrior basketball team, and head Coach Justin Koleno, has made it to the first round of girls basketball district playoffs.