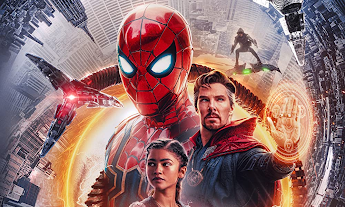 A promotional poster for the film featuring Spider-Man, Doctor Strange, MJ, and the Green Goblin.

The release of Spider-Man: No Way Home was one of the highlights of 2021, bringing in 1.88 billion dollars in the box office: a first since COVID-1. Not only was this momentous for long-term Marvel and Spider-Man fans, but it also put a closing to Tom Holland’s trilogy as Spider-Man all up in a nostalgic, heartbreaking, chaotic-filled film with action and humor.

The movie starts off from where we left in Spider-Man: Far From Home: Mysterio (Jake Gyllenhaal)  exposes Peter Parker’s secret identity as Spider-Man. I thought the beginning of the movie was a little anticlimactic, as I felt they could have done more, in the beginning, to hook the viewer in. I did, however, like how they leaned into the concept of half the city being against Peter, while the other half loved him. It was a different take on what we’ve seen in movies before. Peter didn’t just get his identity exposed, he also had his entire name destroyed whilst it was happening. Even though the beginning wasn’t as exciting as it could have been, it was realistic. We got to see Peter and his allies face the consequences of him living this double life as a masked superhero that the public doesn’t know if they can trust or not.

After the beginning of the movie, it really starts to become interesting and nostalgic, after Peter realizes his loved ones are suffering because of him. In return, he seeks out Doctor Strange (Benedict Cumberpatch) to ask him to wipe the entire population’s memory of him being Spider-Man. In these scenes, I liked that we could get to see Peter Parker’s flaws. He was impulsive, annoying, and slightly selfish. I think this makes him a more likable character, because, throughout the movie, you get to see his character progress into a selfless superhero.

Tobey Maguire and Andrew Garfield’s entrances in the movie are what make this film worth watching. All three of the Spider-Men in one scene are one of the best in the entire movie. All are funny, heartbreaking, and extremely nostalgic for the early 2000s and 2010s Spider-Man fans. I really like how you could catch up on how Tobey and Andrew’s characters have developed since their movies, and how they have retained the same loveable qualities as before.